――Can you tell us about the concept being PixelJunk™ SideScroller? This game harnesses your fluid simulation technology. (Tominaga)
We gave PixelJunk™SideScroller a real retro feel and look, the impression that we wanted to give the player is one of stoicism. During the making of PixelJunk™ Shooter 2 we made a side scrolling shooting game for fun and this is where our inspiration came from. You don’t see these simple side-scrolling shooting games anymore. We didn’t feel the need to make a sequel to PixelJunk™ Shooter 2 and consequently we were looking to create something with a different appearance, different settings. The name of the game - PixelJunk™ SideScroller clearly alludes to the horizontal scrolling action in the game, as well as obliquely referring to the fact that this game is a side story to PixelJunk™ Shooter 2. Players have the use of three weapons: machine gun, laser and bomb and can access upgrades to these weapons as the game progresses.

(Dylan)
Our idea was to take a game that reminded people of games back in the day, and then to give it a modern edge. In those days if you died and your ship lost all its lives, you’d often have to restart the game. By adding checkpoints that allow the player to restart partway through the game, we can do a lot to tweak the difficulty level and make it easier to progress in the game.
(Tominaga)
You’ll notice that the monitor visuals in PixelJunk™ SideScroller have been slightly curved and distorted on the edges of the screen. Anyone that visited an old-school game arcade will remember monitors like this.
(Dylan)
Originally, this visual style was developed by our artists for the menu screen. It looked really great and eventually we had the conversation that went along the lines of “we should implement this visual style in the game itself” and the rest, as they say, is history.

--The explosions when your enemies blow up look great too. (Dylan)
Actually the enemies are created using polygons. As this is vector data and not dot pixels, we wrote a program that caused these polygons to break apart following an explosion. 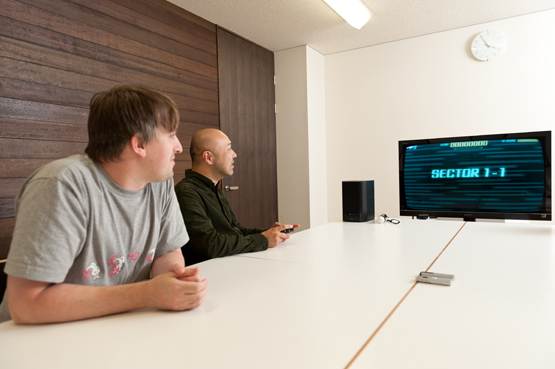 Click here for Part II of the Q-Games interview